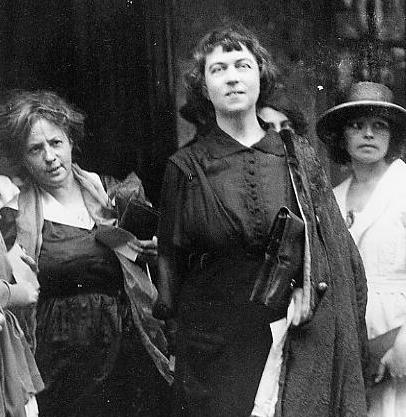 Born of Russian nobility in 1872, it was surprising to me how Alexandra Kollantai related to the revolutionary movements in Russia before, during, and after the 1917 Russian Revolution. Her social class status and upbringing portrays one of wealth and prosperity. She was well-educated and was generally free to seek her own path in life, save for a short marriage that was influenced by her parents in her young adulthood. In her youth she was known for being rebellious and strong-willed, and attentive to the turmoil of the Russian empire while listening in on her parent’s and sibling’s conversations.  Click here for a biography of Alexandra Kollantai.

She obviously had a life filled with the frills of nobility, which only a tiny percentage of the Russian population had, so why did she leave that behind to become a revolutionary?

Alexandra’s extensive western education introduced her to the works of Karl Marx at a young age. She became enthralled with Marxist/Socialist theories and the prospect of equality among the population, especially women. Kollontai was a witness to Bloody Sunday (January 1905 march to the White Palace), at which point she had already become a known member of the Communist movement because of her speeches and writings (Baldwin).

When the Communist movement eventually split and branched into other parties, Kollontai joined the Mensheviks. She helped the party by organizing events, lectures, and other means of protesting the government peacefully. She focused primarily on the rights of women within the revolution, and encouraged to them take their stand and help form the country into a more equal society for all.

Kollontai met with and became close friends with Vladimir Lenin while in Germany, who was an acquaintance from previous party movements in the years beforehand.  During this time, she became affiliated with the Bolshevik party. De’Azia L. Baldwin writes that during Kollontai’s time with Lenin in Germany:

“Kollontai became more aware of the Bolshevik socialist aspirations. One issue of top priority to Lenin, as Alexandra would learn, was how the idea of war would affect workers. This knowledge, coupled with her fierce determination to change the way society and the revolution where going led her to join the Bolshevik party.” –De’Azia L. Baldwin

During the time of the 1917 Russian Revolution and shortly afterwards, you could say that Alexandra Kollontai found herself in the right place at the right time. Her friendship with Lenin and her own motivation to progress women’s rights and rights for the working class gave her a hand in the new-forming government of Russia under the Bolsheviks. I found it interesting that she was given multiple leadership/ambassadorship positions in the government. In fact she was the first, and one of the only women in governing positions as well. Some of those positions include the People’s Commissar of Social Welfare, and Ambassadress to Norway. Her presence as the only woman in the room was definitely noted, as you can see in the following photo:

As you can see, the photo above is packed with the people who ultimately formed the post-imperial Russia/Soviet Union. The new-forming government had to thank Kollontai for her work progressing better wage, rights, and access to education policies in the upcoming years. I doubt the government would have been the same without her motivational spirit and presence as the voice of the women in Russia.

“Most fully articulated by Kollontai, it advocated a congress of producers to be elected by the trade unions and responsible for management of industry and control over the entire economy. Condemning the increasing reliance on “bourgeois specialists,” Kollontai wrote that “only workers can generate … new methods of organizing labor as well as running industry.” As for the party, the Workers’ Opposition called for the expulsion of all non-proletarian elements and for future eligibility for membership to be contingent on the performance of manual labor for “a certain period of time.” – Lewis Siegelbaum

3 thoughts on “The Feminist for Russia: Alexandra Kollontai”